On March 14, 2018, The Supreme Court of Ukraine (The Court of Cassation), sitting as a Chamber composed of judge rapporteur Yulia Chernyak, judges Boris Gulko, Dmitriy Luspenik, Sergei Hopta, and Olena Bilokon, satisfied the statement of Ukrainian citizens Sergey and Valentina Svetlichny regarding the establishment of the legal fact of their forced relocation from the territory of Lugansk region as a result of the armed aggression of the Russian Federation against Ukraine and the occupation of part of the territory of our country.

This decision made a final point in the 19-month judicial history of the family of internally displaced persons, who forcibly left their home as a result of Russian aggression and occupation of part of the territory of the Donbass. This was the result of the whole Sila Prava team’s dedicated effort.

Following the decision of the Supreme Court of Ukraine, thousands of Ukrainian citizens who suffered from Russian armed aggression, i.e. internally displaced persons, families of the victims, wounded and damaged soldiers, will turn to all the Ukrainian courts with similar statements, prepared by our legal team.

In this regard, Sila Prava appeal to all those to whom the country has entrusted to administer justice.

According to official UN statistics, the number of refugees in the world is approaching 70 million people and is growing exponentially. So it will be until these figures are accepted by the civilized world to see the warped fate of each person, his/her plea, and hope.

Tectonic changes have started all over the world, the driving force of which is the growing awareness of each human’s rights.

The era of double morality and the statics of large numbers, on which the entire world politics was built for many years, comes to an end.

Today, civilization is on the verge of a new model of peaceful coexistence and development, or new world wars will begin.

In such a critical situation the correct path can only be based on an adequate assessment of what is happening. This will allow developing mechanisms for timely influence on attempts to create dictatorial kleptocratic regimes all over the world and establish new efficient mechanisms for preventing aggression.

In fact, it is a historic choice between the power of law and the law of force.

The equitable decision of the renewed Supreme Court in the case of one of the hundreds of thousands of Ukrainian families affected by Russian aggression and occupation will serve not only as a basis for the restoration of justice in our country, but also as an example that will push the civilized world to understand what is happening and develop new peacekeeping mechanisms. 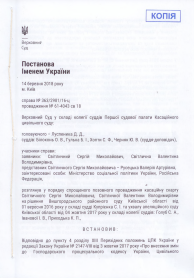 The First President of Ukraine addressed the People of Ukraine